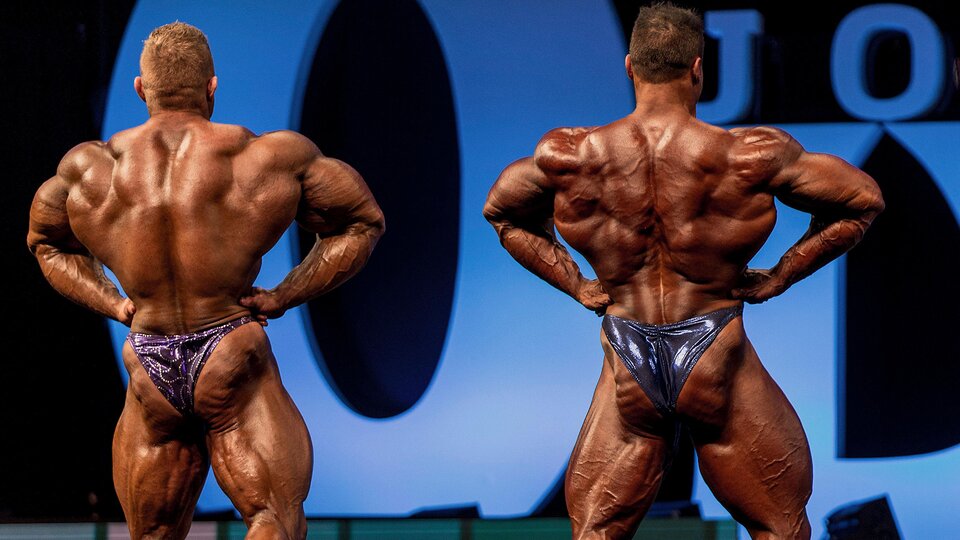 In the Olympia’s 55-year history, only 16 men have taken home the Sandow, with five men—Lee Haney (8), Ronnie Coleman (8), Arnold Schwarzenegger (7), Phil Heath (7) and Dorian Yates (6)—capturing 36 between them. Just missing the cut is Jay Cutler with “only” 4 Mr. Olympia wins.

Things have changed in the past three seasons. First came Shawn Rhoden’s upset win over Heath in 2018. With Rhoden missing from the 2019 line-up, Brandon Curry took the crown. Then the Olympia had its third new champion last season when Mamdouh Elssbiay, better known to most of us as “Big Ramy,” finally put it together and dominated the action.

Will he make it two wins in a row when he takes the stage at the Orange County Convention Center in Orlando, Florida, on October 8-9? It would be the first back-to-back win since Heath last won in 2017. As we now know, anything can happen at the biggest bodybuilding event of the year. Let’s take a deeper look into the 2021 field and see how we think it will go down.

Big Ramy was so impressive when he won the 2012 Amateur Olympia that Steve Weinberger himself predicted he had the tools to win the Olympia that year. Turns out Weinberger was off by eight years, but better late than never.

If he can duplicate his surprising condition from last season, the 37-year-old former fisherman will reel in the title. At 5-foot-11 and a massive 275 pounds, Big Ramy has better symmetry than most give him credit for. While his calves don’t nearly match up with his huge wheels, former Sandow winners have had the same issue and still clinched victory. Overwhelming gobs of muscle can overcome this small deficit any day.

Curry is poised to potentially regain the title Big Ramy took from him a year ago. At 5-foot-8 and 245 pounds, the 38-year-old Curry possesses beautiful symmetry, set off by a small waist and wide lats. This is too much quality not to have a shot at repeating his win of two years ago.

Chapoon, voted the “People’s Champion” by the fans in 2019, will likely be the most conditioned competitor onstage—and probably one of the smallest. At 5-foot-5 and 225 pounds, Chapoon’s lack of size makes it imperative that the “Persian Wolf” has his physique spot-on to move up from his controversial fourth-place finish in 2020.

Bonac has been terrific for years, winning two Arnold Classic events in the last four years. He’s got plenty of seasoned, detailed muscle, but faces the same issue as Chapoon when standing next to Big Ramy at only 5-foot-5 and 225-230 pounds. Placing fifth a year ago, Bonac was forced to miss the Arnold Classic due to the travel ban out of Abu Dhabi. Hopefully that can be resolved before show time.

Lee Labrada has been singing the praises of his son Hunter for years, and his confidence is well-placed. The younger Labrada smashed the field at the 2018 NPC Nationals to win his pro card, and won the Tampa Pro this year. He’s showing up a little bigger, a little harder, and more poised with each outing. A legit 260-pounder at 5-foot-9 (four inches taller and 70 pounds heavier than Lee when he competed), the 29-year-old has been compared to fellow Texan Branch Warren with the same freaky muscle but better flows. Hunter finished eighth last year in his Olympia debut, making a top-five showing this year a realistic possibility.

30-year-old Valliere won two shows this year, the Texas Pro and the Tampa Pro. The 5-foot-10, 255-pounder placed seventh ahead of Labrada in the Olympia last year, so keep your eyes on the vastly underrated Valliere.

Williams was way off at the Arnold, but a body can make significant changes in two weeks. Sixth in the Olympia last season, Williams entered the Arnold as a co-favorite with Walker. A much drier Williams could still battle for a top-five finish in Orlando. With no margin for error, this won’t be a fun two weeks for the 5-foot-10, 270-pound Williams.

The buzz is loud and clear about Walker. The 265-pound, 5-foot-7 New Jersey native is the most talked about new pro in years. The 27-year-old won the New York Pro earlier in the year before cruising to victory at the Arnold Classic. Walker will have as much muscle, inch for inch, as anybody in the show and still could match the likes of Chapoon in conditioning. Fans tout him as the next Jay Cutler in the making and possible top-three material this first time out.

Rodriguez has a really pleasing, well-conditioned physique. He won his first pro contest at the Indiana Pro this season and followed that up with a runner-up finish to Walker at the New York Pro. The 5-foot-9, 240-pounder, fourth at the recent Arnold, was 10 at the Olympia last year. His nickname is “The Nightmare” and he could be just that for anyone hoping to land in the top five.

This is the toughest class to predict. Last year went down to the wire, with the 5-foot-2, 175-pound Shaun Clarida edging out Kamal Elgargni, the 2019 champ, by a single point. Clarida is a smaller version of legendary Flex Wheeler, with a beautifully balanced physique that shines bright on stage.

But taking a closer look at the 5-foot-5, 212-pound Pearson after his win at the Chicago Pro has me going out on a limb. Great shape, great symmetry, large full muscle bellies—I think it will be Pearson for the upset!

Elgargni is bigger than Clarida at 5-foot-6, 180 pounds, and always in great condition. The 47-year-old won the division in 2019 and came in second last year. In one of those “too close to call” classes, an Elgargni victory would not be an upset this year.

This could be the most competitive class in the entire weekend. George Peterson placed third at the Olympia in 2018, 2019, and 2020. At 5-foot-7 and 190 pounds, it’s safe to assume the 37-year-old will make it into the top 5 again. 28-year-old Lunsford placed fourth last year and second in the 2019 Tampa Pro. His wheels of fortune could propel his 5-foot-6, 205-pound frame into the winner’s circle, as well. And don’t sleep on Ashkanani. At 5-foot-3 and 215 pounds, he’s placed fifth in the past two Olympias.

The 26-year-old Bumstead, with size, shape, and famous vacuum pose, is heavily favored to make it three Olympia wins in a row.

The gifted Ansley already has two Olympia championship awards at home after winning the event in both 2017 and 2018, while folks like Dani Younan, Alex Cambronero, and Bryan Jones all have physiques worthy of an Olympia title.

Arnold champ Terrence Ruffin has momentum on his side going into this contest, and Logan Franklin finished with an impressive third at the Arnold after moving from Men’s Physique to Classic. Great overall look and getting better with each outing. Can the 24-year-old be in the mix in Orlando? It wouldn’t be a reach.

It should be another Hendrickson vs. Edmonds battle this year, having come down to the wire the past two years with both athletes winning one. These two have near identical physiques, complete with the obligatory teeny waistlines, so it all depends on whose conditioning is better on competition day. When in doubt, go with the defending champ.

Top 10 men’s physique competitors are usually spot on, so it’s tough to judge. Naturally Edmonds is up there, but Ferguson is always a threat, as is Potvin. So many bodies in this group every year with so few flaws.

Kyron Holden is the competitor to watch. The 5-foot-8, 180-pounder snuck into third last year without much fanfare, and he could make a surprise appearance in the top ranks again.

“King Kong” Kelley is the Lee Haney/Ronnie Coleman of wheelchair bodybuilding. He wins the Arnold Classic every year before doing likewise at the Olympia. He has been so dominating that there really isn’t another legit contender who can be considered a threat.

Khadraoui and Cerame, along with Tyler Brey and Johnny Quinn, hope to unseat King Kelly from his throne. If someone manages to do this, it would be the biggest upset of the entire weekend.

See the complete weekend schedule at MrOlympia.com, including information on the live telecast.

How to Prepare for a PR Attempt
Belly Burn With Shwe -Season 3 | Lower Body Workout | Lower Belly Fat Exercise | @cultfitOfficial ​
How I Lose Fat & Keep it Off: Meals, Workouts + Everything Else
Paul Rudd’s Wellness Regimen Was Specifically Crafted With His Marvel Shirtless Scenes in Mind
Senior Fitness “Get Back On Track” Full Body Easy Workout For Beginners | No Equipment | 26Min