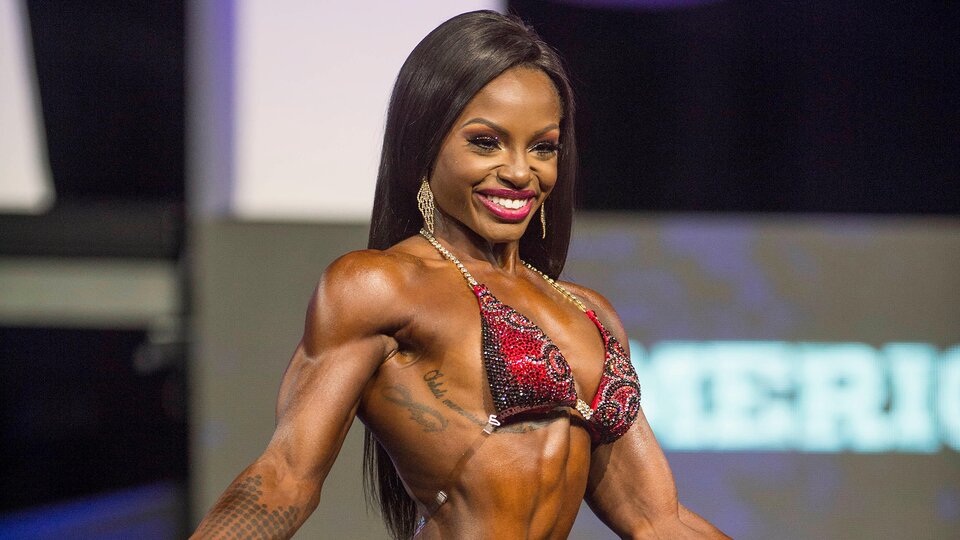 This was a tough competition, with excellent fitness routines from all 12 athletes, but Whitney Jones was the big winner. The 2018 and 2019 Fitness O champion was raring to go after dropping to third last year behind Missy Truscott and four-time champ Oksana Grishina and then having to miss the Fitness International in September due to a positive COVID-19 test.

In addition to having the more complete physique, Jones left nothing on the stage with an energetic, high-skill fitness routine that dominated the evening. Her performance knocked her successor off the throne, winning Jones both the physique and routine rounds to earn her third title and leaving 2020 champ Missy Truscott wondering what happened.

Truscott, who won at the Fitness International, took second in both rounds, and it was close. Safe to say, she and Jones will continue to go back and forth in the standings.

Grishina didn’t make the first physique callout but came back with a strong routine to finish third overall. Ariel Khadr was just a few points behind, repeating her fourth-place finish of 2020. Also repeating from last year was Jacklyn Baker in fifth.

Cydney Gillon rode to her fifth consecutive Figure O win on a body that shimmers when she walks. Balance and proportion are there, along with the dramatic hourglass shape and a fair coat of figure muscle. Something about her perfect presentation makes everything pop even more. There’s no one who can beat her at present, and nothing that occurred onstage at the Orange County Convention Center changed that. She earned a perfect score for her efforts in a lineup of 20 athletes.

Mexico’s Natalia Soltero sure tried, and her balanced package with just enough conditioning and separation earned her the runner-up medal for the second year. The same goes for newcomer Stephanie Gibson, who took third in her Olympia debut with a great pair of shoulders.

Jessica Reyes Padilla was back in the money with a fourth-place finish, and Nicole Zenobia Graham rounded out the top five.

For a hot minute, it looked like Natalia Abraham Coelho might push reigning champ Sarah Villages off her Women’s Physique Olympia throne, but Coelho was never a serious threat. Villages’ perfectly put together package of lean muscle, nothing-out-of-place symmetry, and great flow-of-the-body parts had her all the way, and she looked even better at the finals than she did at the judging.

Villagas won with a perfect score. Too bad for Coelho, who gets better every year–shapely and tight, with good conditioning–as she continues to bring her X-frame into balance. She, too, earned a perfect score, taking second.

Two Olympia rookies finished in the money in the 18-woman lineup. Brooke Walker took third with a solid back and a pleasing taper, while Ana Haras earned the fifth spot with a beautifully balanced physique. That left fourth place for Barbara Menage, a shorter athlete with some serious muscle and an entertaining posing routine.

Andrea Shaw did her homework, came in perfect shape, and cruised to her second consecutive Ms. Olympia title with a beautiful combination of symmetry, proportion, muscularity, and cuts. In other words, Shaw is the elusive total package, and it will be difficult to find a bodybuilder who can beat her.

Her competitors are trying hard, especially veteran flexers Helle Trevino and Margie Martin, who were both in top shape. Trevino had the hardest muscle and most conditioned body onstage, while Martin, who sports tons of muscle was the best we’ve seen her in recent years. Both are two-time Rising Phoenix World champions, but going up against Shaw at her peak, they had to settle for second and third, respectively.

Sixteen female flexers hit the stage in Orlando looking to score a top-five money finish. Mona Poursaleh flexed into fourth in her Olympia debut, while Irene Anderson, who starred in the film, “Too Big for the World,” repeated in fifth place.

The finals of the first IFBB Wellness Olympia competition were held on October 9, along with the Bikini O prejudging. The new sport emphasizes athletes whose lower bodies carry more muscle, naturally, and the posing is similar to bikini.

Twenty polished competitors took the stage at the judging, and the judges had narrowed it down to the top 12, who came back for another round of individual presentations and callouts. The results showed that some athletes had improved their standing over the day, and some has lost points.

Angela Borges and Francielle Mattos emerged as the favorites after the judging. The decision was close, according to the fans, but the score sheet showed a unanimous victory for Mattos, a fresh face from Brazil, who became the Wellness OIympia champ in only her second pro show.

Isabelle Nunes is one who drew more attention as the contest went on, and she surprised by landing in third, ahead of Yarishna Alaya, an early favorite. Alaya had improved her presentation and changed her posing suit, but the early impression given at the judging relegated her to fourth place.

Fifth went to Julia Chittara, who edged out Sunny Andrews for the last money spot.

Prize money went to the top five, but the amounts of the awards were not announced.